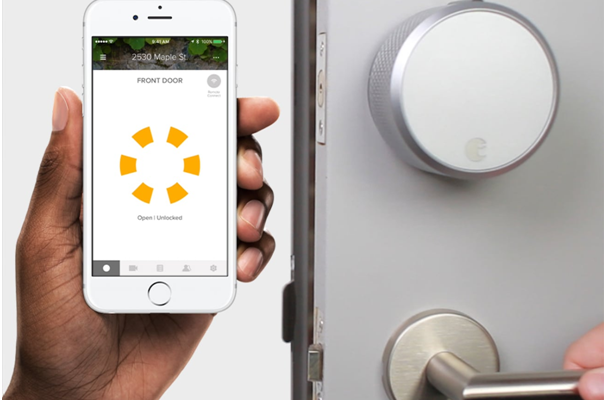 Taking a Look at the August Smart Lock Pro

Michael MooreMay 24, 2019TechnologyComments Off on Taking a Look at the August Smart Lock Pro

The third generation August Smart Lock Pro is a smart lock that retrofits your existing deadbolt. From the outside, nothing changes—even your bolt remains in place. On the inside, your deadbolt mechanism will be replaced with August’s intelligence.

The August Smart Lock Pro replaces the original Smart Lock, which was first introduced in 2014. Since then, they’ve had a lot of time to improve. Pro’s most notable feature is the addition of Z-Wave Plus, allowing it to connect to third-party hubs. Also, when purchased online, the lock ships with an August Connect, a device which acts as an internet bridge. With the bridge, you can now control your lock from anywhere, not just within Bluetooth range. Finally, it ships with a DoorSense sensor which calibrates to the lock and reads your door’s status, ensuring that you don’t lock the door when you accidentally leave it ajar.

Our first impression of the August Smart Lock Pro was that it’s huge. We’ve seen it before at CES, but the vastness of Las Vegas can apparently miniaturize things. While testing the lock, we had a few guests stop by to visit. Their comments ranged from, “What is this?” to, “How do I get out?” and even, “IT’S HUGE!”

The lock measures about 3.4″ in diameter and is made to retrofit your existing deadbolt.

Installation was a breeze. All you need is a Phillips screwdriver and a little bit of patience.

The first feature you’ll come across is called Auto-Lock. When enabled, your lock will automatically lock itself if you’ve left it unlocked. The process is time-based and customizable. You can set the timer to a set time somewhere between 30 seconds and 30 minutes.

Speaking of notifications, August also supports Smart Alerts which allow you to set up push notifications for custom “alert me when” events. There are four events you can choose from:

Once you have your event notification setup, you next choose a time. There are two options here: any time it occurs and within a time range.

Choosing a time range allows you to set a schedule based on the days of the week and time of day. For example, you can set an alert to let you know if the door is left ajar on weekdays between 8 AM and 6 PM.

Overall, the August lock is feature rich and offers plenty of integrations. The features we disliked (auto unlock, laggy Alarm.com integration, and DoorSense) paled in comparison to the overall stellar performance of the lock. And remember, some of our issues were self-created thanks to Door Armor.

For a more in-depth review of the lock, check out http://www.portable.technology/august-smart-lock-pro-review/.

TAGAugust Smart Lock Pro
Previous PostAre You Going Online for Your Next Vehicle? Next PostAll you need to know about UPS